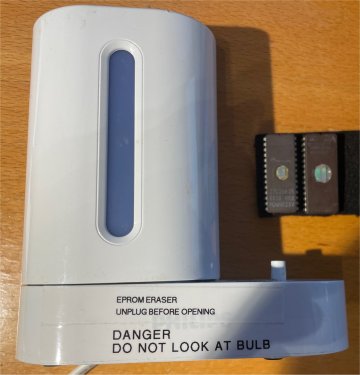 Answering the question: Can you buy a cheap EPROM eraser on the high street in 2022?

The answer is yes, well maybe but definitely possibly. Ladies and Gentlemen I present to you the Philips HX6160 toothbrush cleaner!

Many old computers and other equipment made between the 1970s and early 1990s use EPROM chips to store their firmware, BIOS and factory settings. In the days before EEPROMS (the extra E indicating "Electrically Erasable") and flash memory existed or became economically available in the 1990s, EPROMs (Erasable Programmable Read Only Memory) were by far the best and most common choice. In fact, they were pretty much the only practical option.

An EPROM is a memory chip that can be programmed using a higher-than-normal voltage (typically 12.5V or higher) and which will then store its contents indefinitely. I have EPROMs I pulled from devices over 30 years ago which have not been connected to anything for all that time and have had their windows uncovered, yet have read and returned their programmed data perfectly, though manufacturers usually specified a maximum of 10 to 20 years.

But what if you want to erase an EPROM? Well, the chips themselves have no ability to do this. Instead, the chips are manufactured with a small quartz window. Through the window you can see the actual EPROM chip itself. When new or blank, every bit of an EPROM returns a 1, with the programming process flipping any bits that need to be changed to a 0 using the programming voltage. In very simplified terms, the high voltage used to program an EPROM changes the state of the gate controlling the programmed bit so it returns a 0. This change cannot then be reversed electronically. Instead, to reverse the change and erase the EPROM you need to expose the chip to UV light shorter than 400 nm. This has the effect of ionising the silicon oxide, resetting the bit to its default 1 state.

It's been said that if left under fluorescent lights for a few years the chips will erase themselves due to the UV in the light, but I don't know of any examples of this happening. Even sunlight (which contains significant UV) usually takes several weeks of exposure to erase a chip, though manufacturers always recommend the window is covered by a sticker once programmed to avoid accidental erasure.

So, we've established that to erase an EPROM we need a powerful UV source. Such things are dangerous. They need a timer to make sure you don't accidentally leave them on too long, ideally some sort of safety interlock to prevent it being possible to see the bulb when they're on (which would cause severe eye damage or blindness) and a tray to place the EPROMS.

Back in the 1980s, commercial EPROM erasers cost well over £100 (the equivalent of over £300 in real terms today with inflation). Even today, on Ebay used 1980s erasers often sell for around the £100 mark and may not even have a working bulb. You can buy relatively cheap erasers from China for £20 to £30, but there seems to be only one common model sold and every review I read said that either the bulb, the timer or both were broken in transit!

So what everyday object is easily available and contains a high power UV source? Well, it turns out electric toothbrush head cleaners do! Many of these now use UV LEDs which while they may still work and are still dangerous, are much harder to position on the EPROM itself. The ideal model would use a traditional UV bulb that gives out UV light in all directions. One model that does is Philips HX6160.

There are loads of these new and used on Ebay. I bought this one for £5 including delivery, opened but unused as apparently people often only use the toothbrush charger part and ignore the cleaner. By removing the splash shield that covers the bulb (at your own risk - do not do this if you're not absolutely sure what you're doing) you can position one or more EPROMs around the bulb. DO THIS WITH THE DEVICE UNPLUGED - YOU DO NOT WANT ANY CHANCE OF THE BULB COMING ON WHEN THE DEVICE IS OPEN AND YOU CAN'T RELY ON THE INTERLOCK WITH BITS REMOVED AND AN EPROM POTENTIALLY OBSTUCTING THE SAFETY SWITCH. Note the bulb gets surprisingly hot in operation, so you probably want to avoid the EPROMs touching it.

The HX6160 has a built in 10 min timer activated by pressing a button on the top. I found it needed a maximum of 20 mins (sometimes just one ten min session) to erase any of the 27C256 and 27C512 EPROMS I tested. When on, if the bulb is working you should see a slight glow through the blue window on the side of the cleaner.

UNPLUG THE DEVICE WHEN LOADING OR UNLOADING EPROMS AND WHEN NOT IN USE. DO NOT TRUST THE SAFETY INTERLOCK EVEN IF IT HAS ONE, AS IT'S NOT DESIGNED TO DO THIS.

Once erased the EPROM should return FF from every location and can be programmed with a compatible EPROM programmer such as a cheap "Willem" board in the case of the 27C256 and 27C512 chips shown, which only require 12.5V programming voltage. The "Willem" programmer requires an older PC with a printer port, but can be bought from China for around £15. Note that the USB socket on the "Willem" board is just to provide 5V power but for programming EPROMs an external 12v power supply is required. Alternatively, the TL866II Plus programmer uses USB but costs slightly more. Check whatever programmer you plan to buy is compatible with the chips you plan to use, both the type of EPROM and its programming voltage. 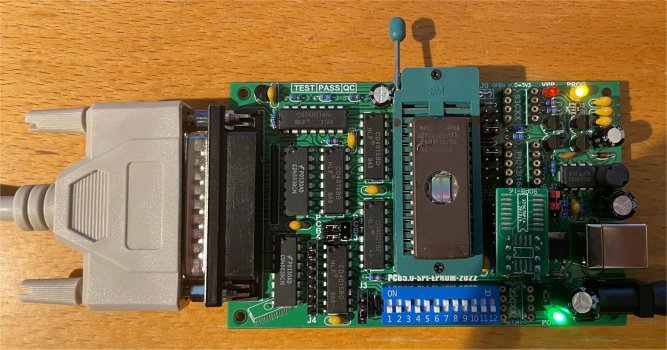 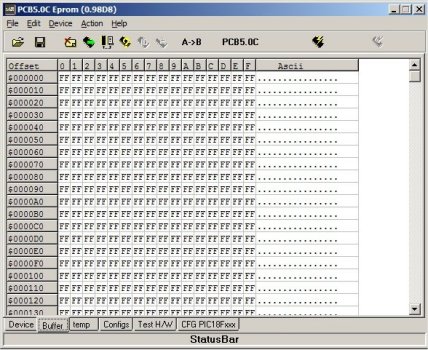