Software and information provided fon this site is provided "as is" and no guarantee can be given that these are in any way suitable for any particular application. Documentation should not be regarded as a complete set of instructions and the advice of a suitably qualified person should be sought before implementing or installing any solution.

Comments and suggestions are welcome via support@readyformed.com. 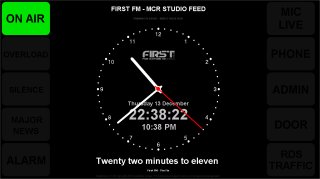 A studio clock application for use around your station including a customisable logo, studio name, station strapline, RadioText display, RSS News headline display, automatic status indicators for silence and overload which can be triggered from a sound card and many other on-screen alerts and alarms (such as telephone, door, Major News Story and RDS Traffic active) which can be set and reset via various methods. The screen includes an updatable text field that can be used to show the station's RadioText or "now playing" song details and various other indicators that were originally designed for our in-house broadcast management platform. This application can be used with both traditional 4:3 monitors (set to 1024x768 screen resolution) and widescreen 16:9 monitors (set to 1280x768 screen resolution) by changing the configuration file and can run as a "stand-alone" clock or integrated as part of a station management platform. We recommend installing TimeSyncTool on the same PC rather than using Windows built in network time client, to ensure split second time accuracy is maintained. For Windows XP, 7 or 10 (32 or 64 bit). May also run on Linux with Wine.

This simple audio log recorder is something we wrote for an in-house application a few years ago, but is released here in the hope it might be useful to others. All it does is record constantly from the default Windows audio device and compresses each hour to a separate 160k MP3 file.

This is a simple desktop stream player for Windows. If you regularly need to listen to a number of different public or private Icecast or Shoutcast streams (such as remote station feeds) this is designed to make life simple. Just put a list of stream URLs in the ini file and the player will sit in the notification area near the clock ready to give easy access to them, playing in the background without cluttering your desktop or main taskbar.

This is an alternative to Pira's MagicRDS software but not a replacement. This is intended to be used to automatically send Radiotext to your RDS encoder and adds a few extra features needed for automation, such as the ability to trigger and cancel the traffic flag (with an extra safety timeout in the program in addition to any safety timeout in the encoder) automatically using external metadata (so no additional hardware or relay switchers are required) and automatically setting the encoder's internal clock every hour to ensure it's always split-second accurate. In addition, Radiotext+ is supported with a simpler set of configuration options compared to MagicRDS, potentially making RT+ easier to impliment.

Note that this program does not currently allow the configuration of initial parameters such as PI and PS. The expectation being you will use your encoder's normal software (such as MagicRDS) to perform the initial setup, then use this program for automating updates and control (such as Radiotext and Traffic) from your studio or automation system. The initial version only fully supports Pira32 based RDS encoders (which may include some versions of the BW RDS2+), however limited support for the Pira MRDS1322 is included and I intend to add other models in future.

For Pira32 based encoders (which I hold very in high regard), I've changed the group sequence compared to the MagicRDS defaults. This may help improve Radiotext reception (twice as many 2A groups sent in relation to 0A). The Pira default is to send four OA groups in a row, followed by two 2A groups followed by any remaining groups (i.e. 0A 0A 0A 0A 2A 2A), which seems a little unusual compared to other encoders (for some reason it's impossible to stop the four 0A groups being send in a row and spread them out more evenly on the Pira32, unless you send everything as a UDG group, which would be overkill). Sending more 2A groups in relation to 0A improves RadioText reception reliability and display speed and more closely matches what some other encoders appear to do. I suspect Pira's original configuration choice might be an attempt to improve dynamic PS (which is often used in the US as part of their RBDS modifications to the RDS standard) by ensuring the 4 blocks that comprise an entire PS label are sent together, however dynamic PS is a breach of the RDS standard and is illegal in many countries such as the UK. This change corrects this behaviour and should have no effect on a normal static PS name. 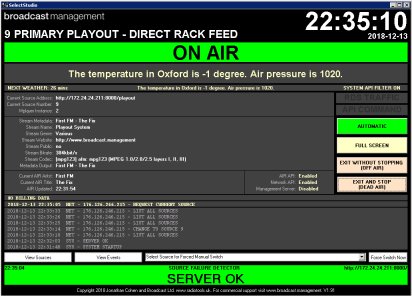 SelectStudio is a Windows front end to Mplayer providing some useful features for a broadcasting environment. It can select and play one of up to 9 different Shoutcast or Icecast streams and will save the "Now Playing" metadata to a file, adding in station straplines or even the local weather, while simultaneously sending the artist and title to TuneIn via their AIR API. In the event the machine loses connectivity to the remote server it can play a backup file and will automatically revert back to the stream once the connection is restored. There’s also a web API to allow remote control from a management portal and to automate various features.

This application pulls text messages from a cheap USB mobile broadband or 3G dongle to enable easy access to your station’s text messages from multiple locations. The application then posts these messages to a web server so they can be processed and displayed in a web browser wherever required (a separate stand-alone application could be used instead of a web server). Note that this is just the utility to retrieve the text messages. The web portal forms part of our Broadcast Management platform which will be released in the near future. However integrating with other platforms or your own website should be straightforward if you are familiar with web scripting.

This simple program receives metadata from a Rivendell playout system running RDairplay and saves it in a text file for use by other software. This would typically be used so that third-party Windows applications such as live streaming or RDS encoders can receive the current track name and display it on the listeners PC or radio.

The program has additional protection to prevent old or stale data being shown should the playout system fail or be incorrectly configured. This includes a default "strapline" which is set on startup and when a cart not flagged for metadata display is played in Rivendell. In addition, a timer monitors the last time data was received and resets the output to the generic station strapline after this time as an safety feature to prevent incorrect information being broadcast

This simple program receives metadata from an RCS Zetta playout system and saves it in a text file for use by other software. This would typically be used so that third-party Windows applications such as live streaming or RDS encoders can receive the current track name and display it on the listeners PC or radio.

The following is not completed software, but example scripts for managing Rivendell systems.

Rivendell import and export scripts. These scripts written in php for Rivendell 2.19.2 are intended to enable the import and export of carts either individually or for a whole group. All important metadata, segue markers and scheduler codes should be preserved and you can even move carts between systems with different sample rates. Please note that you will need to be very familiar with Rivendell, PHP and shell scripts to make use of these and they may require customising for your system.